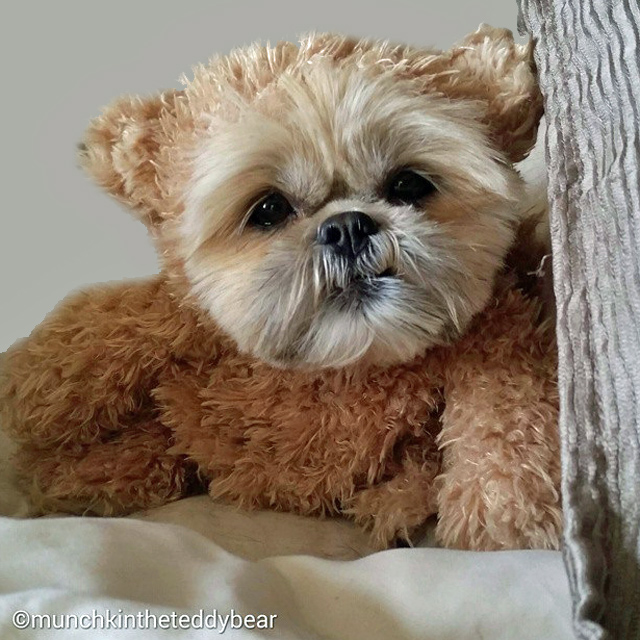 Munchkin, born and raised in Southern California, is the cutest little Shih Tzu with a heart of a bear. Munchkin has always admired bears as the majestic symbols of the wild. Bears are very intelligent, curious, strong, powerful animals, and most importantly, they have excellent memory about food sources.

While in kindergarten, Munchkin’s teacher asked everyone what they wanted to be when they grew up. While some wanted to become doctors and firefighters, the majority wanted to be models, athletes, rappers or superheroes. When she got to Munchkin, Munchkin said that she wanted to be a teddy bear! 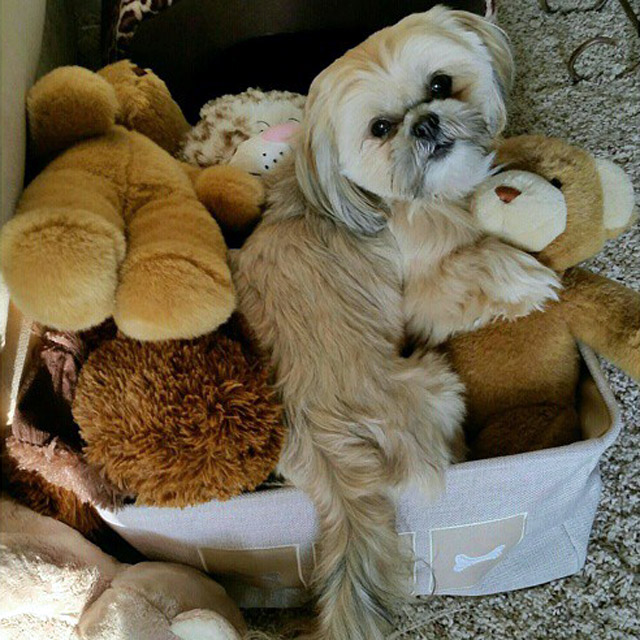 Munchkin as a kid with her favorite toys

Fast forward a few years later, her Momager made her a Halloween costume from a stuffed teddy bear. At first Munchkin refused to wear it in public. She feared that others might make fun of her. 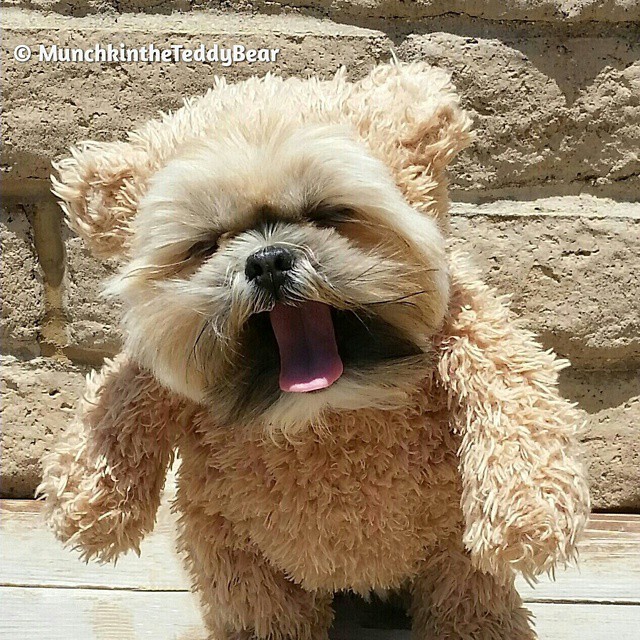 But eventually the bear suit grew on her and she started wearing the teddy bear costume on almost every occasion. To perfect her teddy bear appearance, Munchkin would spend most of her time with other animals closely studying their behavior. 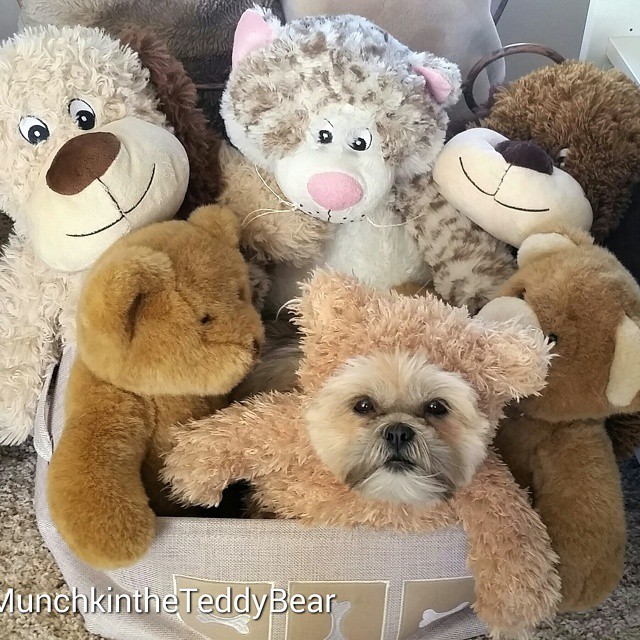 Munchkin during her first field research

The teddy bear appearance offered plenty of perks. As a bear she could always go places where other dogs weren’t allowed. No one expected a bear beyond this point. 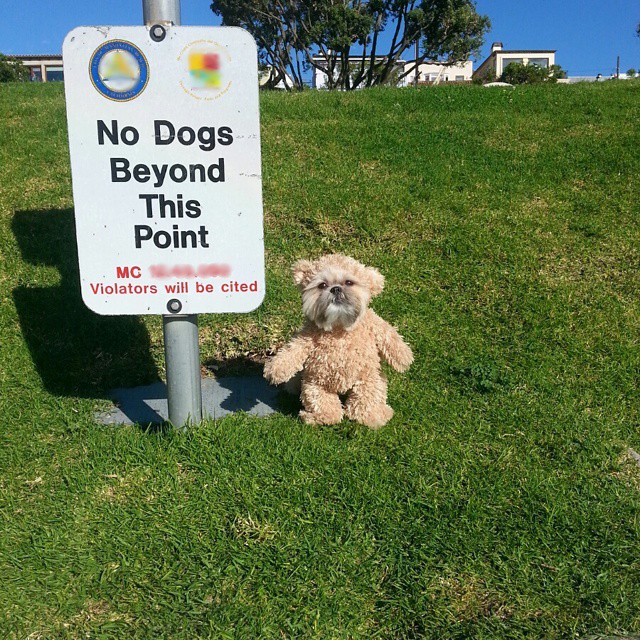 By the time she graduated high school, Munchkin the Teddy Bear was convinced that being a bear wasn’t a matter of a suit but of attitude. 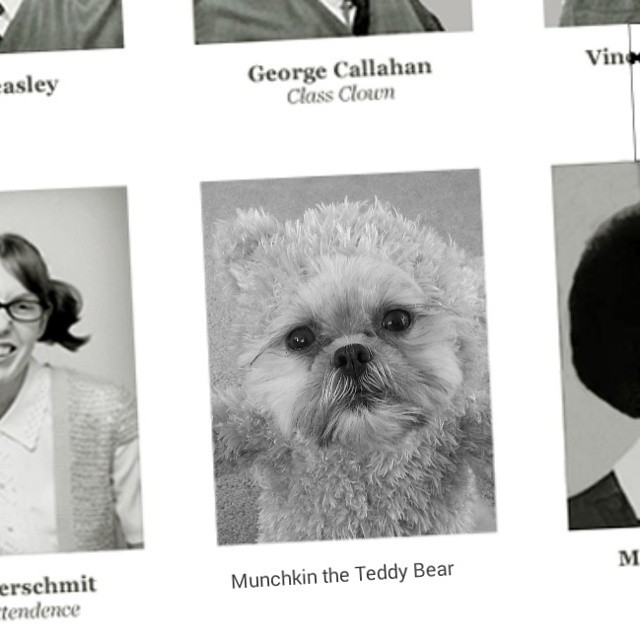 After graduating high school, Munchkin hit the route 66 to college. She couldn’t wait to study Ursinology (study of bears) and Shihtzuism (study of Shih Tzus) at the Baylor University. She specifically chose and got accepted as a honors student into the Baylor’s Bear Program. The University mascot – the Baylor bear – has been her lucky charm ever since. 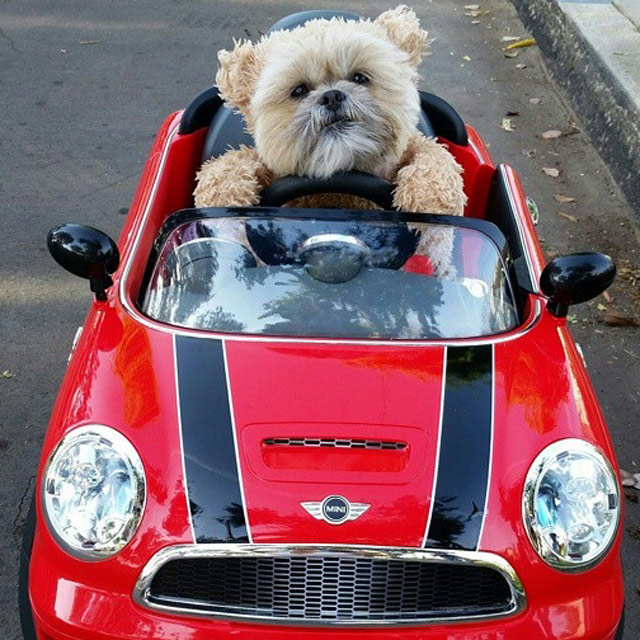 On the road to Texas, thoughts and ideas were racing through her head. The drive seemed to be endless. Somehow she ended up in Mexico where she celebrated like a bear for a couple of days. 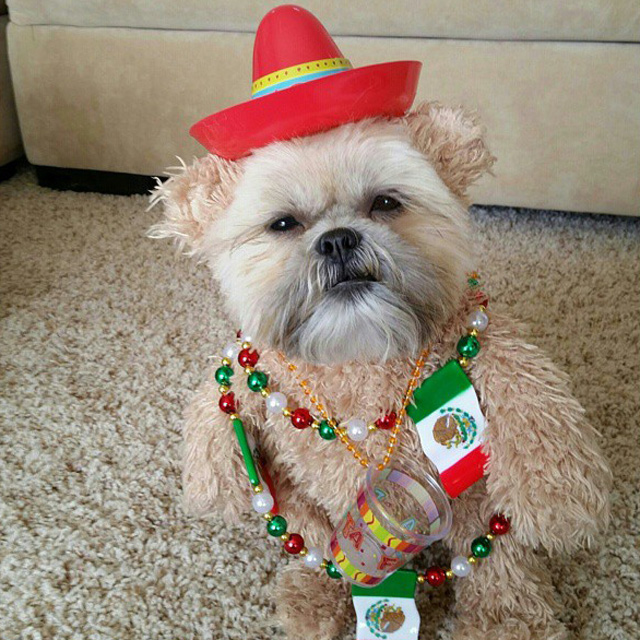 But the responsible Munchkin didn’t let the wild fiestas interfere with her future plans, although it did get pretty hot in there. Upon her arrival in college, she rented a small office space where she could completely focus on her studies. To make herself feel more at home, she painted the ocean and the beach on the windows of her office space. 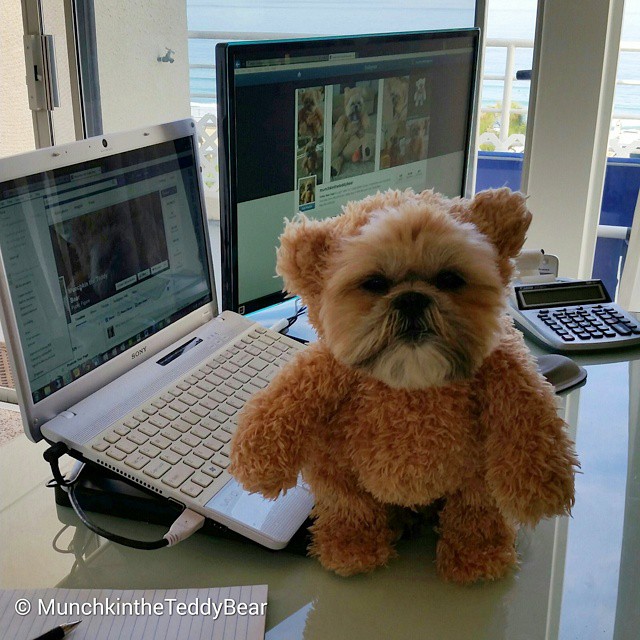 Munchkin studying in her office

She studied from dusk till dawn, eager to learn everything there was to know about bears and Shih Tzus. 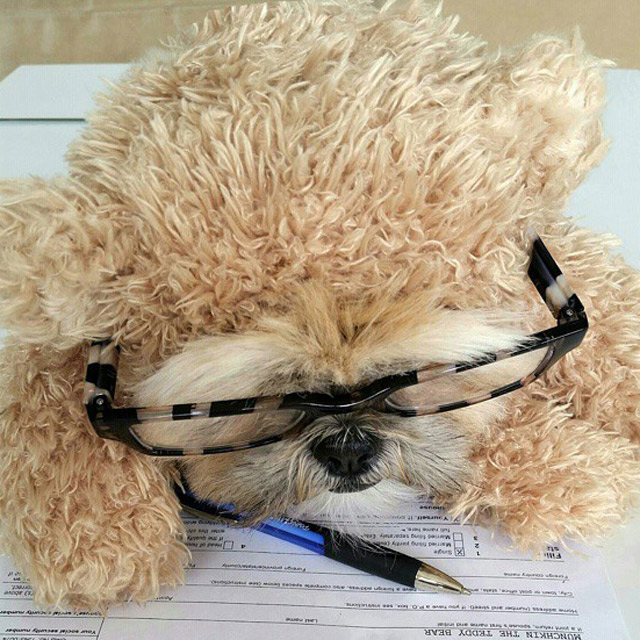 Munchkin pores over her final papers

During her last year of college, she decided to write a diploma thesis based on a self-conducted research. The research promised to provide evidence that Shih Tzu and bears are in fact related. Her DNA analysis placed the ancestors of today’s Shih Tzu breed in the group of “ancient” breeds indicating “close genetic relationship to wolves”. That result was a bit disappointing but not discouraging. 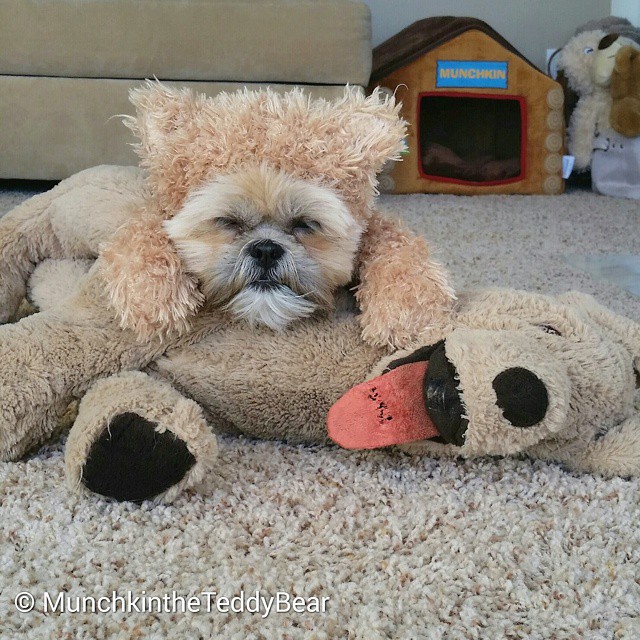 Munchkin quickly came up with another suitable approach. She took tons of pictures of herself with various teddy bears. After a thorough examination of the pictures she concluded that the large dark eyes, the well-shaped nose and the thick fur were almost identical. 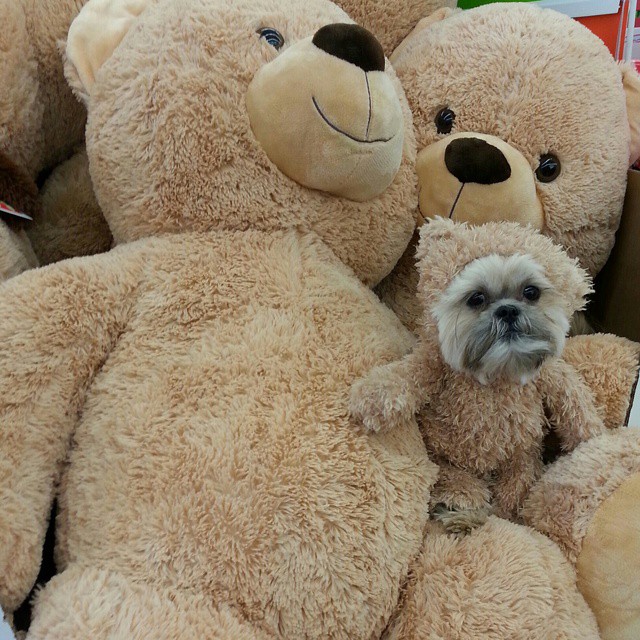 Could we be related?

However, the height posed a problem. 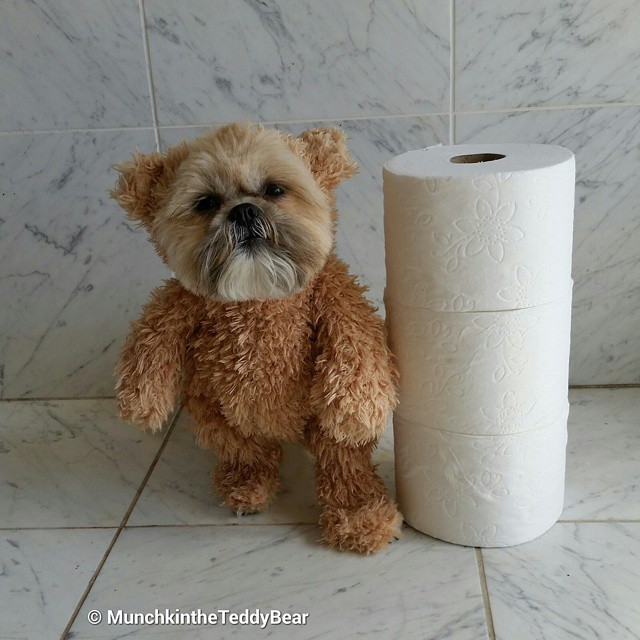 I wish I was a little bit taller…

In search for advice, she contacted her good friend Ted. Due to his explicit language, his words of wisdom can not be reproduced here. Yet, the conversation yielded some excellent results. 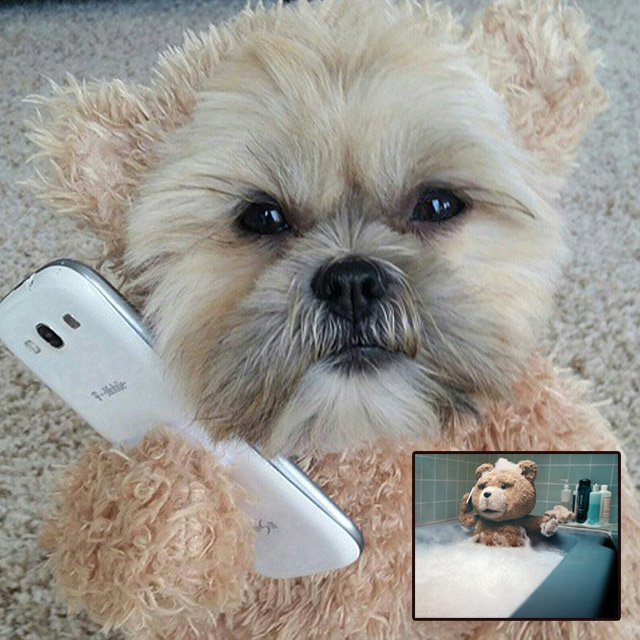 After an impromptu class in psychology and some additional editing, she published her diploma thesis under the title The Bear in You. In her work she proved her high school hypothesis to be true: being a bear wasn’t a matter of a suit but of attitude. As ideal examples she used (top left to right bottom) Mr. Bean’s best friend Teddy, Teddy Riley, Teddy from the Wolf of Wall Street, Ted, Winnie the Pooh, Teddy Pendergrass, Teddy Roosevelt, and last but not least the Paddington Teddy. She concluded her thesis with the encouragement to follow the inner bear by quoting the fellow Teddy Roosevelt: “Believe you can and you’re halfway there“. 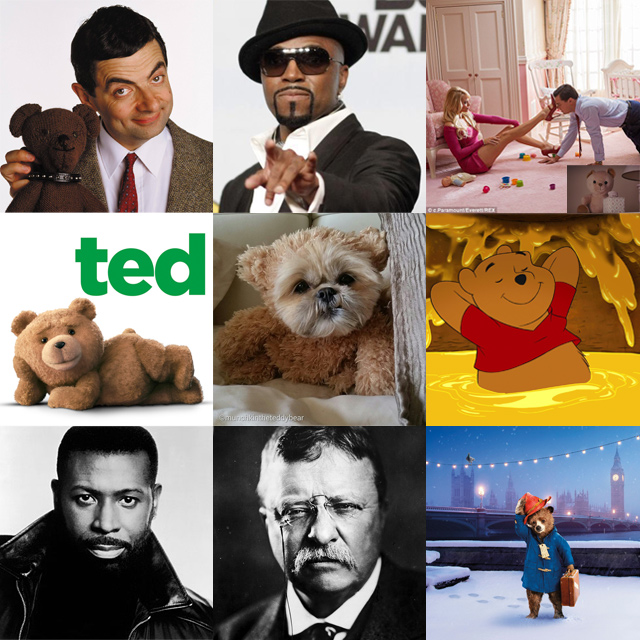 Good Morning America was so thrilled about Munchkin’s work that they immediately invited her for an interview. Jesse Palmer who is a big fan of pugs, couldn’t resist taking a picture with Munchkin. Admiring his pearly whites, Munchkin almost forgot why she was there. For some unexplained reason she kept calling him my teddy bear. She later blamed it on her great nervousness. 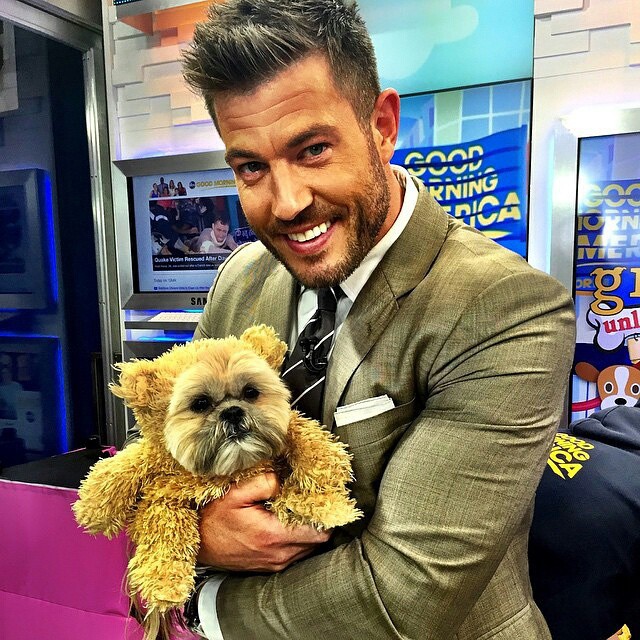 The hug she will never forget: Jesse Palmer and Munchkin