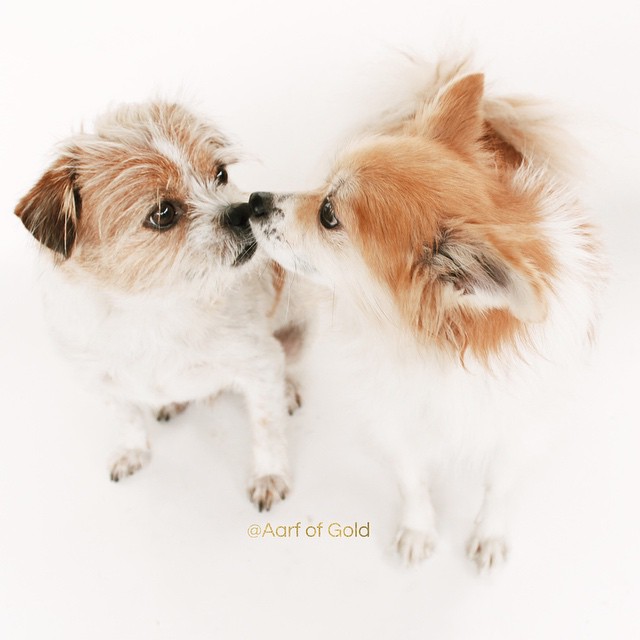 Dogs are not our whole life, but they make our lives whole.

Allow me to introduce Mister and Rohver. Mister is a 5 years old Norfolk Terrier and Griffon Brussels mix. Rohver is a 7 years old Pomeranian and Papillon mix. Mister and Rohver live in OC, California and were both adopted from overcrowded shelters by their pawsome owners who just can’t get enough of their two adorable boys.

Their pictures are simply beautiful. Each picture is sealed with a meaningful quote attached as a caption. Each quote perfectly complements the moment captured by the camera and portrays the essence of the extraordinary relationship between humans and dogs as well as dogs’ nature.

“Dogs notice, they share, they draw conclusions, they like it when they’re able to be of service and are touchingly grateful when they’re praised,” – Roger Ebert

While looking at their pictures something has told that there is a story hidden somewhere between the lines. I’ve contacted Mister and Rohver to find out more about the cute duo. Their response really touched my heart.

Both of their owners grew up with dogs and have loved dogs all their lives. They met each other through Rocket during the summer when they were both 11 years old and instantly became best friends. Today, they want to make a difference for dogs and are working on a modern dog accessories line that encourages dog adoptions. The modern dog accessories line Aarf of Gold is launching this fall. A percentage of sales will go to nonprofits and shelters to help other dogs in need.

Read the heart-warming stories of Rohver and Mister written by their amazing owners.

Rohver came into our lives about 6 years ago when we were looking to adopt another dog so that our senior dog Rocket who passed away earlier this year, can have another playmate. We decided to adopt from an overcrowded dog shelter and so came across Rohver at the East Valley Animal Shelter in Los Angeles. The shelter estimated him to be around 2 years old at that time, but we thought he was younger than that!

“Dogs just need you and love, that’s all,” – Jennifer Westfeldt

Rohver is now 7 years old. When we first brought him home, he was a shy and reserved dog. Little did we know that his true character is so regal and that of a prince! We should have named him Prince instead of Rohver. Prince Rohver doesn’t beg for food either. If you play hard to get, he’ll just look the other way or get up and leave. The mellow sleepyhead doesn’t like it when you tease him but will definitely come to you for belly rubs, affection, and attention.

“Dogs have a way of finding the people who need them, filling an emptiness we don’t even know we have.” – Thom Jones

One time we called him for dinner, but he didn’t respond. We thought he ran outside so we searched high and low for him around the neighborhood but couldn’t find him. We were devastated! We returned home to search online if anyone has seen him when we heard a weird scratching noise. We looked around and saw some fur sticking out of a box. And there he was… sleeping! As happy as we were to find him, we just couldn’t believe that he didn’t respond to the numerous times when we called him! When Rohver sleeps, Rohver really sleeps!

There is honor in being a dog.” – Aristotle

Rohver is ecstatically happy when we come home and always run to greet us. Whenever we leave for work, he will pop his head out the window and sadly watch us go to work. It’s difficult to leave the house sometimes when he gives us that look. Rohver is extremely friendly with kids because he knows how to charm his way to get food and head pats, which he always does. That proud look on his face when he gets what he wants, always make us laugh!

Rohver loves playing hide and seek! We would run around the house and hide in some spots and call Rohver. He will search and search until he finds us and when he does, he would wag his tail so much! He fills us with joy because everything he does makes us smile. It’s the little things that he does that we don’t take for granted!

After adopting Rohver, we weren’t really looking for another dog but somehow, fate has it, a little over two years ago, Mister came into our lives as well. We follow a lot of dog shelters and rescue organizations on our personal social media. That one night after a long day at work, we were heading to bed. For some reason, we decided to check our Facebook about dogs and that’s when we stumbled across Mister’s photo and video.

“In a dog’s life, some plaster would fall, some cushions would open, some rugs would shred. Like any relationship, this one had its costs. They were costs we came to accept and balance against the joy and amusement and protection and companionship he gave us.” – John Grogan

On the rescue site, it said that his name was Pugsley and that he was a 1-year-old Pug and Shih Tzu mix. Next morning we went to the Baldwin Park Shelter in Los Angeles to find Mister placed in a kennel along with 5 other dogs because the shelter has many dogs but not enough kennels. He was an owner surrender who named him “Naughty” and dumped him at the shelter. The shelter told us that “Naughty” was a 3-year-old Norfolk Terrier and Griffon Brussels Mix. Based on his teeth and fingernails, we believed the information at the shelter was more correct, except for the name. We called him by Pugsley and Naughty, but he didn’t respond to either name. Based on his spunky personality at the shelter we decided to go with Mister!

“…people have been trying to understand dogs ever since the beginning of time. One never knows what they’ll do. You can read every day where a dog saved the life of a drowning child or lay down his life for his master. Some people call this loyalty. I don’t. I may be wrong, but I call it love–the deepest kind of love.” – Wilson Rawls

The super smart Mister learned his name within a week! We don’t know who gave him up but we guessed it’s probably because Mister has epilepsy and medications bills can add up quickly. Mister used to get 3-4 seizures each month but we’ve changed up his diet so he only gets 1 seizure every 3-4 months now. It breaks our heart when we can’t do anything but watch him in that state. We would talk to him in hopes of calming him down, as well as gently petting his back. Once his seizure is over, he’s a happy little boy again! Because of his neurological problem, he doesn’t do well in new environments as well as meeting new people.

“I do not concern myself with my inability to feel such comfort amidst humans (other than with very few friends and family), but, rather, am simply thankful that at least dogs exist, and I’m humbly aware of how much less a person I’d be – how less a human – if they did not exist.” – Rick Bass

Mister is the opposite of Rohver! Rohver is like a prince while Mister is just down to earth like a little scruff ball! He would come to you and literally demand a patting or a belly rub by placing his paw right on your foot! The cutest thing that we love about Mister is that when we come home from work, not only is his tail wagging at a hundred miles per hour, he smiles with his teeth showing! We’ve been trying to photograph that but whenever he sees the camera, he stops smiling.

“Every dog has his day, unless he loses his tail, then he has a weak-end.” – June Carter Cash

Whenever Mister does something he knows he’s not supposed to, you can guarantee he’s no where to be found! But the funny thing is that he hides only in 3 spots so he gets caught anyways. Some times, we would pretend that we don’t see him and would call his name. In hopes of not getting found, he would sit still like a statue! When he’s caught, he tries not to make eye contact with us but by then, we’re laughing so much that we forget what he got into trouble for in the first place! Mister fills us with so much happiness and brings many smiles to our face everyday.

“My dogs are crazy. They’re always getting into some kind of trouble… but then again, they’re my most loyal friends.” – Zac Efron