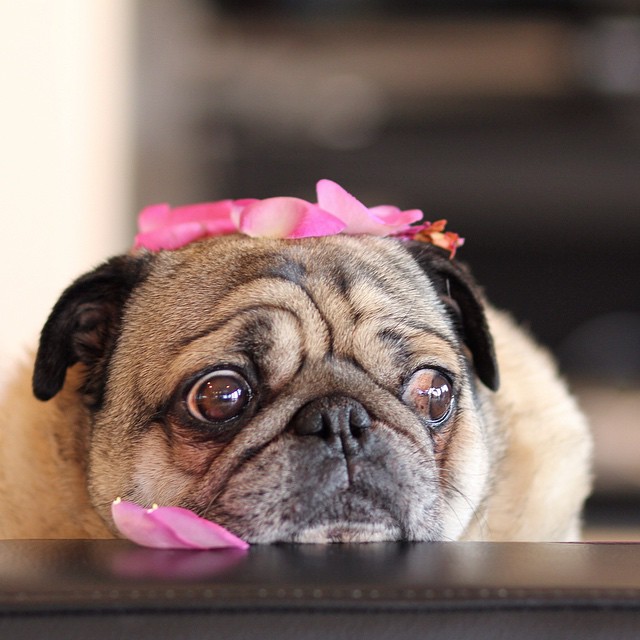 Sigmund Freud was the father of psychoanalysis. Davie is his great great pugson.

Pugalicious Davie showed interest in psychology at a very young age. Being a dog allowed him to enter the most secret territories of the human mind and witness the weirdest behavior of the human kind. There were so many unanswered questions floating around in Davie’s mind. Questions that desperately needed to be answered. Questions like:

Who ate my damn cake?

Davie conducted his very first psychoanalysis on apples and oranges. He observed a group of apple and oranges for days. His group observation concluded that both apples and oranges were similar in size, weight, and shape, and that both were picked from orchards. He then picked one apple and one orange that caught his attention with their extraordinary quiet and reserved attitude. Davie figured that this uncommunicative behavior must have its roots in their childhood. Davie had questioned them for days without receiving a single answer. None of them showed any kind of emotions or reactions. Davie diagnosed them with a severe case of apathy. The only way to liberate them from this heavy burden was a fruit salad.

Fruit salad is the best remedy for apathy.

The burning desire to better understand the mental, physical, emotional, and social activities of the humans, or simply called human behavior, inspired Davie to begin his second experiment. His neighbors happened to be the perfect proband for this experiment. He would spend hours sitting in front of their windows observing their daily interactions. The experiment confirmed what the Greek philosopher and scientist Aristotle said 300 something years BC:

All human actions have one or more of these seven causes: chance, nature, compulsions, habit, reason, anger, or appetite.

All human actions are driven either by emotion or reason, or both, while humans seek pleasant things and strive to reach the eternal happiness.

These people have no morals but great genetics.

His third experiment and final experiment focused on the psychoanalysis of dogs. He concluded that dogs are pretty simple creatures driven by instincts and emotions. Their behavioral patterns are much less complicated and obvious. Their social structure has less rules, less regulations and no social pressure. The lack of complex thought process, premeditation or planning ahead allows dogs to fully live for and enjoy whatever is happening at the moment. Something that humans have been desperately trying to achieve for centuries.

Davie studies the dog version of “Lie To Me” in slow motion.

Going over the results of the last two experiments, Davie realized that dogs have something that humans desire – the ability to fully live in the moment. It was his turn to help save the human race by opening the first therapy center ran by a dog. As his first experiment showed, fruits were a lost cause, hence, the practice accepted dogs and humans as patients.

Davie is the only therapy you need!

His first patient was his brother Buff. Buff’s attention span was definitely in deficit. To help Buff regain his attention, Davie would nail a small piece of meat to the wall and make Buff stare at it for a set period of time. Dave named this therapy method the ‘Yarmulke Stare’.

Living in the moment requires to be mentally present in the moment. The latter is the key of meditation. Davie’s daily routine included various meditation techniques. Before seeing a patient, Davie cleared his mind by exhaling the negative and inhaling the positive.

Davie meditating before his next patient appointment

It was almost impossible to book a therapy session with Davie. His therapy center was booked out years in advance. People and dogs from all over the world traveled to see Davie in action. They showered him with unnecessary gifts that brought tears to his eyes and raised insignificant doubts regarding their diagnosis.

Davie helped many patients overcome their worst fears. A fear is a devastating thing that totally ruins the whole living in a moment thing. A fear in any shape and form prevents you from reaching your goals. Like for example, cancelling a date with a shady stranger you briefly met online because you fear he’s not going to like your haircut.

Don’t let a bad haircut stop you from meeting your Mr. Right.

And don’t blame it on a sweater either!

The most difficult type of patients were the internet addicts. It was almost impossible to get through to them unless you send them message.

She hasn’t read my message yet.

To cover the growing demand, Davie started offering group therapy. The groups were built based on the issues of its participants. Like this group below suffered from the Backpack Syndrome. They wore backpacks everywhere they went. Davie attempted to show them that it’s totally acceptable to leave the house without a backpack by letting them touch his backpack free back.

Note to self: Take a long bath when I get home.

If you are looking for a therapy that actually works then visit Davie’s therapy center right now. And don’t forget to enjoy the moment!