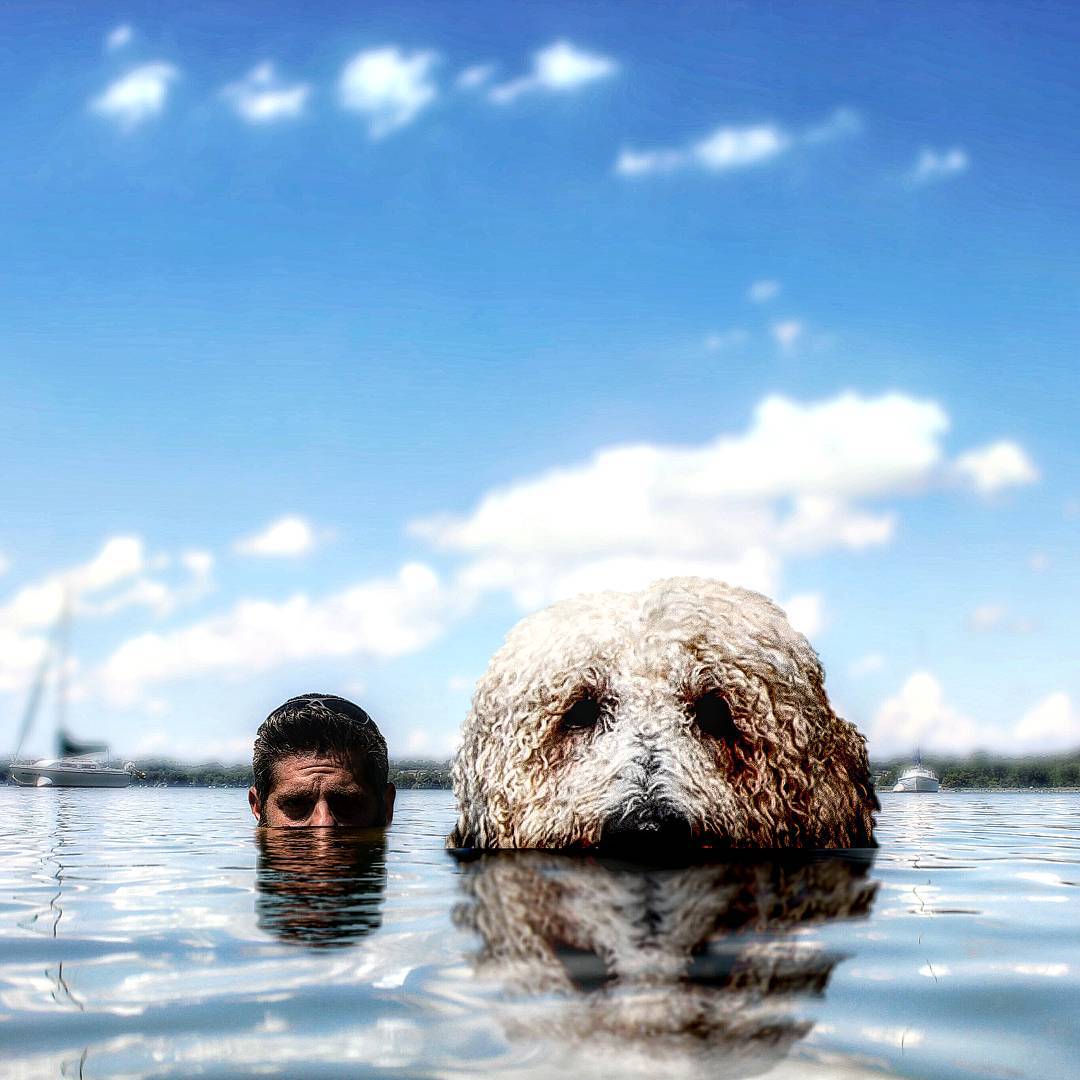 I’m becoming a pet person. I’m sorry. I tried to fight it. But the force was too strong with this one. I am helpless. ~Chris Cline

A few years ago, Chris Cline, a talented artist with a truly unique imagination, moved to Minnesota to be with a very special someone – a wonderful girl named Christine. They met on Instagram. Chris was adamant on pursuing Christine. After talking on the phone for 6 months, he came to Minnesota to finally meet her… And he never left. It’s that simple!

Staying in Minnesota meant leaving his entire life – family and friends, pets, and the overall lifestyle, back home in Virginia. Chris quickly learned that although the girl was definitely worth the move, the 4 feet of snow and -40° temperatures weren’t. The terrible weather and the overwhelming feeling of being homesick was a disastrous recipe that sent sliding Chris into a sad place in life. And then, last summer, Christine came home with a surprise – a Goldendoodle they named Juji (joo-ji)!

I remember the day Christine told me she bought a Goldendoodle. I was less than thrilled that she was bringing home a sissy dog. Little did I know that he would grow up to rival even me in the art of being “a big dumb guy”. Actually, he’s not dumb, but he’s so super “not smart”. He burps, scratches himself in public, and likes to compete in the “sounds and smells” game while we sit on the couch watching guy stuff. He’s my best buddy.

Chris immediately fell in love with Juji. Juji has truly turned his life around and they are now absolutely inseparable. The Goldendoodle helped Chris find a new outlook on life and in his artwork. It’s amazing how much power a puppy can carry into your life.

Take a look at their amazing adventures together!

Ever since Juji got his hairs cut, he’s lightning fast. Even fast enough to wrangle some cattle and then call it a day. “H’yah, boy!”

“Okay, Juji…i really need you to step back before I light this”. Spending time with the puppy on the beach is awesome…but I’d be in big trouble if I came home with a hairless dog.

Morning fishing venture… although terrified of water, Juji is not afraid to grab the fish I catch and run. He waits patiently.

Lunch time… Because I pick the worst snacks, Juji has promoted himself to a supervisor.

As Christine and I take in the view, Juji waits patiently for my command to chase those noisy birds away.

Moonrise at the boat launch… after daring each other to jump into the dark water for 30 minutes, Juji finally got fed up and pushed me in. Jerk!

I’m not positive who is walking who, but I assure you that with I.Q’s as low as ours, it really doesn’t matter. It is sometimes surprising that we even find our way home.

An actual picture, unedited, of Juji and Chris.

Join Chris and Juji for more pawsome adventures on Instagram!