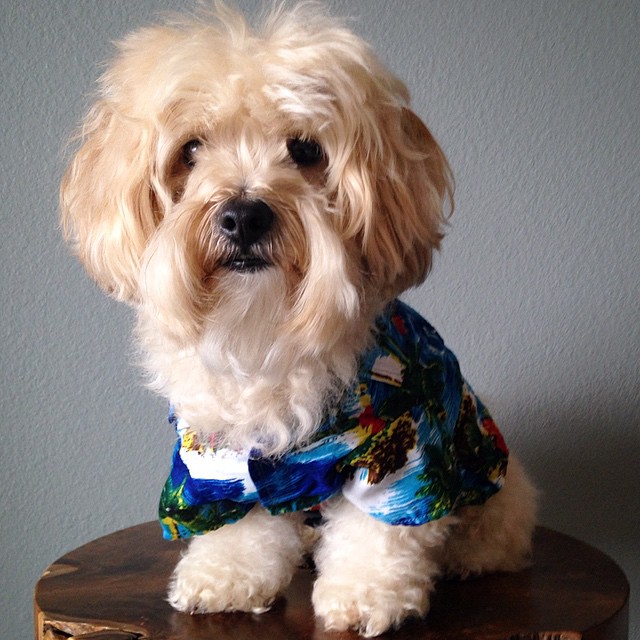 Home » Catch Scruffy if You Can

Catch Scruffy if You Can

Scruffy is a Lhasa Apso and Poodle Mix who lives in Seattle. Being a cute dog was never enough for the overachiever Scruffy. He chose to become a quick-change artist. Each of his many personalities requires him to act and dress accordingly. But his success didn’t come overnight. To make ends meet, Scruffy first got a job at the local Krispy Kreme. As an exemplary employee, he took the Krispy Kreme slogan “Eat Krispy Kreme Doughnuts” very serious. After getting fired from his job for eating more donuts than he ever sold, Scruffy decided to start anew.

Scruffy – the employee of the month

To make the change significant, he decided to become a woman. He figured that getting the hair did will do the job.

They see me rollin’… they hatin’…

After realizing that the hair is just a tiny fraction of what it takes to be a woman, Scruffy decided to move to Hawaii and get a job as a bartender at a beach bar. While he was looking to buy the perfect outfit for his trip, someone has mentioned how much he resembles Nick Nolte. Scruffy never made it to Hawaii. Instead, he went to Vegas to become a Nick Nolte impersonator.

Nick Nolte is my spirit animal.

After getting in a bloody fight with an Elvis impersonator, Scruffy was asked to leave Vegas. He then ended up as a half-birthday stripper at the local Seattle bar called lhAZZapoo.

One fine day, Snoop Dogg stopped by for a drink at the bar where Scruffy was shaking it like a salt shaker. When he saw Scruffy skipping around the pole like a crazy dog, Snoop almost died laughing. But Scruffy saved his life by paw-slapping the funny outta Snoop. Shortly after, they become best friends. Scruffy was so obsessed with Snoop that he became his Doppelgänger. Which made Snoop go Dre on Scruffy.

When I’m no longer rapping, I want to open up an ice cream parlor and call it Scoop Dogg.

Shortly after their fallout, Scruffy has moved back in with his mom. She is the only person that really gets him besides cooking, cleaning and the other good stuff.

I’m very excited about Scruffy’s next adventure. For more detailed story of his life adventures, head over to his IG account scruffy_in_seattle.